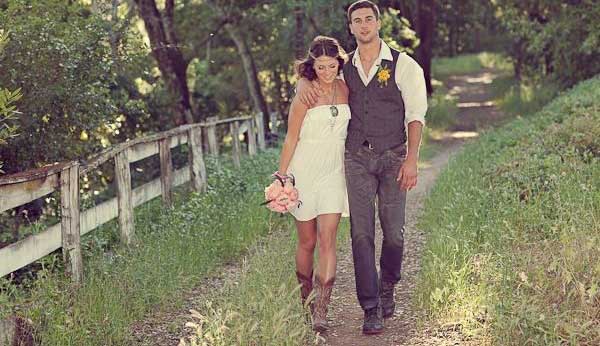 Men are governed by lines of intellect – women: by curves of emotion. – James Joyce

A good friend of mine once took out a friend’s new roommate on a blind date. He told her to wear a dress but to make sure it wasn’t a white one. The destination was his friend’s wedding and she was his plus one. After the date, she was furious and refused to speak to him again.

I heard him tell this story and couldn’t help think to myself that if you replaced him with Matthew McConaughey, added some mediocre and attractive actress, blasted it on the silver screen, that same girl who was upset about being on the date would be wishing that some guy would do something like that for her.

But she had to experience it in real life and it pissed her off. Why is it that what works in the movies, doesn’t work in real life? It’s because women don’t give a fuck. They want the most impressive wedding date and don’t care at all about romance. All she wants is her friends at every wedding she attends to talk about how great her boyfriend is. It doesn’t matter the quality of their relationship, so long as everybody else is envious.

Even though we know this, I still encounter stupid articles on the internet suggesting “good” first date ideas. The hilarious part about all of these ideas is that they are the quickest way to ensure you don’t get a second date. They are guaranteed to have her calling you a creeper or a weirdo as she laughs about you to all her friends.

Example: Go and search for as many climbable trees as possible. Climb as high as you can and take photos for evidence.

Can you imagine the look on her face as you drive her around the neighborhood looking for trees? She’d be gone the second you got high enough in a tree for her to get away without you catching her. You’d be an inside joke between her and her friends for the next twenty years. You would be the bad date story she would use to represent all the bad dates she went on before finding her husband.

This, among many others, are on the list of horrible dating advice on the internet. The only advice I can offer is this: Take her out for a few drinks. That’s it. don’t even commit to dinner. Why? Because she doesn’t fucking care. She doesn’t want romance, so long as she can convince all her friends that she has it.

So whenever you encounter advice on first dates, take note at how elaborate it is before giving it a shot. If it’s more than meeting for drinks, it’s a bad idea. The don’t want grand romantic gestures. They don’t want gondola rides and swans, sunsets, picnics, or any other ridiculous shit you would see in a chick flick. The only thing she cares about is if you’re good looking enough, charming enough, and successful enough, that when you put on a suit and tie and place a glass of whiskey in your hand, all her friends will talk about how amazing you are. We judge women on a scale of hot vs crazy, they judge us on the wedding date scale. And you women wonder why we aren’t romantic?